Anatomy of a feint No.3

Sam Underhill’s running style is distinct. Indeed, it isn’t really a run, it’s a scamper. His shoulders are hunched, his body compact, perhaps from all of those lung puncturing tackles he makes. As he gallops, his head is pushed slightly forward, his arms are gathered in tight, it looks as though his forehead is searching for the line. Maybe when he was learning to run as a child, he felt this position would make him somehow faster. He is quicker than you think. A player who is upon you before you are ready. Those tackles bruise your bones as much as your ego. The blue boots he adorned on Saturday looked a little like sneakers. That’s the right word. A softer tread there rarely was across the Twickenham turf. From the gunshot echo that reverberated from Lawes’ chargedown stole Underhill, the ball bouncing fortuitously into his grateful arms. He snuck forth, one man closing in on him and eternal glory. 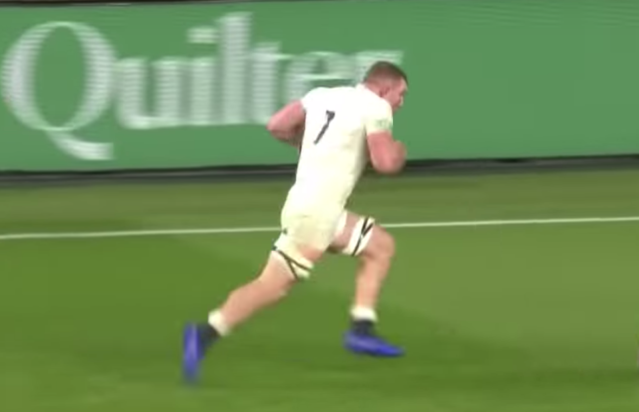 Stop the tape. Rarely does a rugby player find themselves in such a position. The player he had to beat was Beauden Barrett. The All Black, voted the world’s best player for the past two years, was coming across the field diagonally; he was looking to cut off Underhill in the corner.

Barrett had the pace to cover; there are few faster in the world game. But this is the position I allude to. Because of the angle, Barrett is running predominantly backwards. And it is a major component in the feint being executed so effectively. Underhill’s timing is exquisite. With Barrett in exactly the right position (below), Underhill makes to go back inside.

His brief pause and redirection (coming underneath the retreating defender) allows the New Zealand fly half to fall perfectly into the cross hairs. Barrett cannot turn to face Underhill, his momentum will not allow him to fix his feet accordingly; he will end up on the floor. You can see in the picture above that his legs won’t let him. The only option is for the All Black to turn his back and twist the other way.

This is where Underhill wants him (above), he can operate in this blind spot. For the briefest of seconds, Barrett can no longer see him. The England man repositions himself on his original course, having sent his opponent off line. He creates enough space to make the corner and score the try. When watching this at full speed, there is a tangible (and wonderful) sneakiness, which is very much part of its allure.

It is a semi fortuitous moment, but owes a great deal to the timing of the openside. It’s rare to see covering defenders of Barrett’s quality made to look so daft. It was a glorious moment for Underhill, whose overall game had played such an important role in England playing so well.

This, of course, is ultimately a moot point. The man Underhill really had to beat was the TMO, not Barrett. And in clipped South African tones, Marius Jonker did head him off at the pass. The try wouldn’t stand. But no one knew that at the time. Lawes was adjudged to be offside, so everything Underhill did was legal; Barrett is totally committed in defence. Indeed, the fact it was not given, is kind of by the by. As England are more than aware; games can swing on the smallest of moments. The main thing is that you get yourself into these positions in the first place.

The ‘non try’ is also a lovely metaphor for the game as a whole. England outfoxed New Zealand in many ways; exposing both a vulnerability and also a belief in their own game. Yes, they came up short, but in these Autumn Internationals, the performance can weigh more than the win. In no uncertain terms, Underhill and England have re-announced themselves on the world stage.

These fallow few months for Eddie Jones – a fifth placed finish at the Six Nations earlier this year and a stuttering Springbok summer tour – represent a fine feint of their own. They have taken us one way, and then the other. But the truth now comes into view. Maybe Eddie and this England side are quite good after all. Maybe this World Cup tilt is still on.