On a sun-kissed South American morning, in the suburbs of Buenos Aires, a man in a baseball cap sits in his garden, against the base of a tree. Like all of us, he is held captive in his home. And yet, there are global moves afoot. He doesn’t look like someone making a tilt at one of the most important positions in World Rugby, but as he speaks to me about his aims and desires for the sport he loves, Gus Pichot is open and relaxed. At one with himself, at one with the situation he has created, at one with the incredibly difficult task he has set himself.

“Why is a very good question,” a laugh sidles from his mouth and his head rolls back to allow his eyes to scan the azure sky. This is something those close to him have asked. “I always like things to be challenging. I’m from Argentina, I could have chosen to play a different sport; I was pretty good at football. But I went for rugby and was always the smallest guy on the pitch. And I have a big responsibility. I always challenged as a player; I always wanted the best system for the players. I could have gone for the commercial stuff, media; worked for ESPN. But I wanted to grow the game… I could have waited; could have sat back for four years, travelled the world in business class, watched great rugby games. But that is not who I am. This is what needs to change about the game. We are not here to take advantage of the system, we need to change the system.”

Pichot was an iconic player. If you close your eyes, you can still see him. His socks rolled down, those dark Latin locks tucked behind his ears, the wandering eyes; an aqua and white hooped shirt that looked a little too big. And this bid for chairmanship feels like a classic Pichot manoeuvre: a quick tap. Alongside practice, planning and tactics, this sport needs instinct. Amidst the storm, you need vision, belief, a trust in your own ability. He has seen a gap and gone for it.

“That’s a perfect analogy. Life is about moments. I don’t want to get too philosophical but it is part of my DNA. Time is very precious. And it is critical to go now. I don’t want to be someone watching the show when I have a chance to be on the stage. I have always been that guy. I saw the opportunity and I have to go for it. Things happen when you do.”

Something clicks inside my mind: that’s why there’s no running mate. Because, when you go on a run like this, people will come with you?

“One hundred per cent,” he says, a smile slinking out from beneath his cap.

But it isn’t that easy. The former scrum-half is discovering that many bureaucrats prefer the devil they know. How does he change the mindset of the establishment, those who have been doing what they do for so long?

“By showing them that change is not against what they think; that change is not chaos. That is the tool of conservatism for the last 300 years: if you change, you’ll be punished. But of course, it’s not true. If I show people that I’m not a crazy Argentinian bent on anarchy, that I want the same things they do, then they will understand where I want to go. Bristol and Richmond were two very conservative clubs in England. I turned up with my long hair and different way of playing. They made me captain. I’m not a stupid person, but I am also not someone who just hears ‘no’ and takes that as the answer.”

The passion sits within Pichot like a blessing and a curse. You can sense he is very aware of how it may adversely affect those whom he seeks to persuade. But it will also inspire different ideas and bring new people to the game.

“We need to do it together. We have to work horizontally, not vertically. I have always worked like that. It is how I used to play: it wasn’t just the captain or coach who gave us instructions. We all contributed. We can’t just sit in Dublin (World Rugby HQ) and push things out to people. We have to engage and listen and adapt; not just pass things down. We need to work horizontally as a group of rugby nations. And be proactive. We’ve been reacting since 1995, 1987 even. We need to ask what people want from their governing body. We need to be more equal. Otherwise, it won’t work.”

The rugby world represents a half-formed jigsaw puzzle; some bits sit well together, others don’t seem to fit anywhere. Players are being pulled in different directions; Six Nations, Lions Tours, Autumn Internationals, as well as domestic league campaigns. Wouldn’t it be easier to clear the table and start again?

“It comes back to mindset. If we all agree that we want the whole thing to work, then we have to have a mindset of looking at everything. We all want the sport to grow. I don’t think there is anyone involved in the sport that doesn’t want it to be bigger and better. We need to explore everything. But World Rugby doesn’t tell people what to do; as a leader, you don’t do that. We work together. And we need to move as fast as the slowest nation. If England or France are moving quicker than Romania, Uruguay or Canada, then the game doesn’t grow. Ultimately, we need everyone to be competitive at a World Cup.”

Speaking of which, I ask about Argentina stepping out the way for Australia to host the sport’s biggest competition in 2027. It could be perceived as a way for Pichot to curry favour with the Antipodeans.

“Maybe I have miscommunicated that. I will tell you the facts. I spoke with the Argentinian government of Cristina Fernández de Kirchner six years ago. That was when the idea was first whirring around my head. I followed it up when (Mauricio) Macri won; I went with Bill (Beaumont) to pitch the idea and it was in a very positive position. But since that meeting, Argentina has endured huge financial problems (even before the Coronavirus). And we were left thinking, how can we ask the government, the Argentinian taxpayer, to write a cheque for this bid? It just wasn’t possible; it wasn’t the right time for Argentina to host a World Cup. We haven’t spoken to Rugby Australia about anything. I haven’t done any trade-off. I have never traded on any position I’ve held. I want a World Cup in the Americas more than anything else. I’m sorry but the wrong message has been received.” 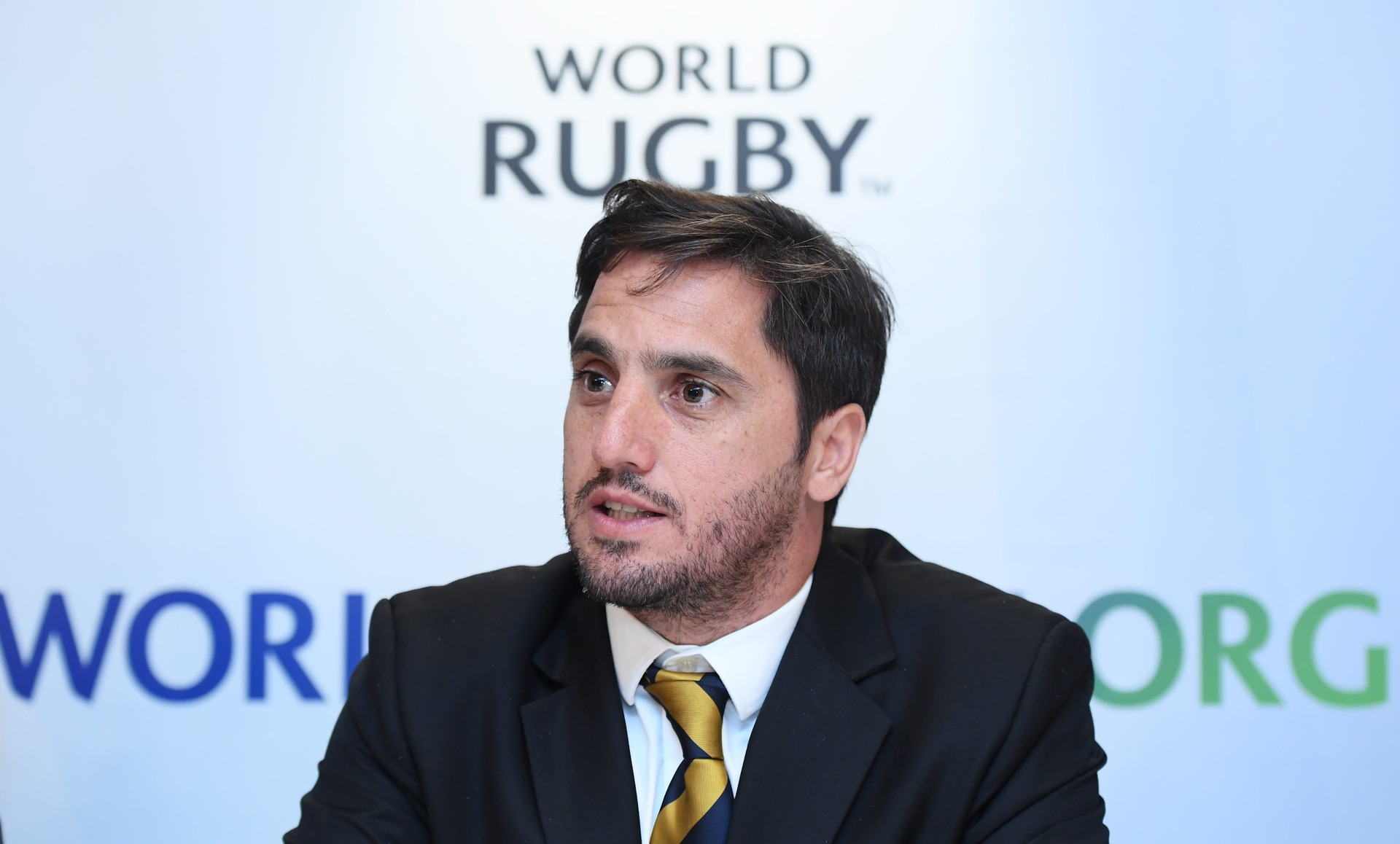 And what of the alleged lobbying from people like Bath owner Bruce Craig?

“I haven’t spoken to Bruce since San Francisco (2017). But I have a good relationship with him. I have a good relationship with lots of owners. But this is not about the clubs winning or losing. Again, it is about everyone talking and listening to each other. We can get the best for them and for international rugby. But we have to work together. The (global) calendar needs more work. I said that. It needs to look after the emerging nations more. We need to keep listening.”

The more you listen to Pichot, the more his character comes through. He is resolute and tenacious, and yet there’s a softness about his aspect that warms your soul. He is romantic but pragmatic, fair and unfazed by the scale of the challenge. He is incredibly earnest.

“I’ve been like that since I was a player. To be a part of a team, everyone has to know and trust each other; you have to open yourself up. In my last game for Argentina, the 3rd/4th playoff in the 2007 World Cup, that is what I said to the team: ‘You have my heart in your hands…’ You can see it, it’s recorded. They knew everything about me: my good, my bad. That achievement, of being 3rd in the world as an emerging nation, of beating France twice on home soil, was all down to integrity. We were able to do that because we knew each other. And if you want to achieve something special, that is how it needs to be. There needs to be more talking, more honesty, more transparency.”

I conclude our call and wish him luck with the vote on May 12th. He claims not to worry about losing, as he would be perfectly happy back on the paddock coaching the under 16s, or wherever the sport takes him. He owes rugby everything, and this is, as he sees it, his way of trying to repay the debt.

His candidacy has given everyone something to think about. It’s a leadership contest that has caught the imagination of many, and one that he might not win. But after hearing what he has to say, from the base of his tree in Buenos Aires, one thing is very clear: rugby desperately needs leaders like Agustin Pichot.