Please click this link to read this piece on RugbyPass

It was telling that two individual moments of brilliance were all that England could proffer in Paris. Against a defence fatigued by work already done, England’s Jonny May jinked forth to add a shine to England’s opening Six Nations weekend that probably wasn’t owing. Brilliant and individual, two adjectives with equal weight. But the latter always seems to matter more in a game of fifteen-a-side. One person can only do so much. And, in fact, he didn’t do enough. It was May who put up his hand so incredulously, beseeching referee Nigel Owens, as Rattez ran through to gift France their crucial second. 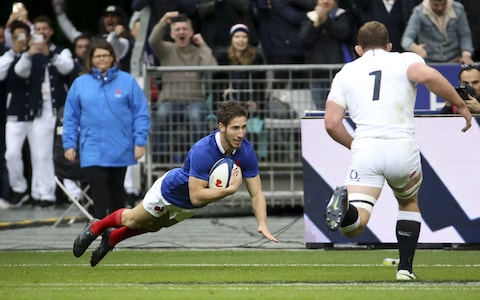 It was most startling. That France, a team so traditionally full of individuals, was now a composed unit, working for each other with such selflessness. And it was England, a team so recently famous for its togetherness, now relying on individual moments of skill. And wilting under individual mistakes. Furbank was perhaps excusable in his fumbles; Farrell far less so. The World Cup Final, it appears, was a crushing blow for England. A return to earth that shook harder than anyone had realised. The aftershock of which is still, seemingly, being felt.

We were told Eddie Jones had experienced grief. To combat it, post-Tokyo, he’d hauled himself up in a CrossFit boot camp and flagellated his body daily by trying to out-burpee those twenty years his junior. ‘The mistakes were mine,’ he uttered forth and, kettlebell in hand, vowed that the mission to be the best team in the world was still on. He was typically bullish pre-match in Paris, offering ‘brutal physicality’ as a guarantee from his side. But international rugby, much like lycra on a sixty-year-old, tells the truth. And Jones could only watch as wave after wave of benign attack was repelled and the ball, all too often, was affably coughed up. That obdurate, pitchside scowl of his, chewing on those press conference words as if they were a wasp.

Why did he not pick an 8? Starting a Six Nations campaign, in Paris, against what looked like an incredibly capable French team, why move Curry to such a pivotal position? Perhaps this underplays France’s dominance. Maybe even with Dombrandt, Hughes or Simmonds (I mean, there’s actually three of them), the French would have beaten England. But as the ball popped loose at the back of the scrum, and Dupont swung a boot to disrupt yet another England opportunity, you couldn’t help but think of that trio languishing back home. Well, languishing… Dombrandt was, in fact, rampaging once more for ‘Quins to win them a place in the Premiership Cup Final.

Without the Vunipolas or Tuilagi, who limped out with a familiar groin strain with barely a quarter of an hour played, England seemed bereft of penetration. Aside from May’s rug cutting late on, it is difficult to bring to mind any moment where England got behind that first line of defence. It is an old question, one which has raised its head with Jones before, and one he will have to wrestle with ahead of Scotland. Incidentally, how do Scotland feel about the Calcutta Cup? Similarly fruitless on Saturday, they might now think more positively about playing host than when Hogg hamfisted the ball over the Irish line.

Let’s talk French dominance though. It seems inextricably linked to signing Shaun Edwards. A feat especially clever when you remember he’d already agreed terms with at least two other teams. But what did he do with France to make the difference? Aside from the technical elements of line speed and dominant tackles, this was a team utterly coordinated. To defend well you must move and think as one. This is the missing ingredient of French rugby full stop. And as a mindset, it bled into other parts of their game. They hunted lost ball in packs, wingers came looking for work, no one player was expected to work harder than anyone else. The back-row embodied the industry; Cros led the line purposefully, Alldarit was rightfully man of the match, and Ollivon, with a gait not dissimilar to Olivier Magne, was always on hand, sprinting in for two impressive scores.

Interestingly, each of their tries owed a lot to defence. The first and third indebted to reading the outside blitz tendencies of England. Rattez and his Roman nose on an inside line aimed at the pivot of the press for the first. And then Dupont finding a flimsy blindside and a flailing Youngs after England, again, engaged too eagerly at a lineout. The middle score was fortuitous, but the chase of the up and under had Edwards’ Wigan accent haranguing it down the park. A new voice has brought them a renewed purpose.

You see, it wasn’t just England who lost the World Cup. France did too. But, it appears, they’ve come to terms with it. Realised what they were doing was not working and have moved on. And yet because of what happened in Yokohama, because of how close to a sporting summit they came, how false the feeling of beating New Zealand was, England have not. The same men are in the boat, all rowing the same way. Chasing the wave of what could, would, should have been. In defeating the All Blacks and then losing to the ‘Boks, England grabbed hold of a terrible mantle: an uncrowned king. And with it, a gown so heavy that it weighs everyone down. The final did irreparable damage. Mainly because it took something out of those players that means the blueprint from the semi-final is now unattainable. And yet England are still grasping for it. Like a spectral sceptre, so apparent, yet so tantalisingly out of reach.

Had injury not intervened, would Eddie have changed any of his title cast? He is still looking for something, which I think has gone. He has not fully come to terms with his grief. And until he does, I cannot see an upward turn.

1 Response to The spectral sceptre