Team of the Season – Gallagher Premiership 2018/19

My team of the season. I know we have one round to go but, you know, you have to be quick these days. Here are the men whom I think have performed in most laudable fashion during the Gallagher Premiership 2018/19. Sure, you can disagree; I may even be wrong. But I have put forward my case, by all means, argue yours.

15 Alex Goode – Simon Hammersley was good, Jason Woodward played well and, in fact, Mike Brown had a very productive season. But there’s only one name for this slot and you’d struggle to counter. If Farrell plays at ten for England, I cannot understand why you’d leave this man without a white shirt. Magic feet, supreme rugby awareness, and he can drink for days.

14 Ollie Thorley – Few have made an impression like Thorley this year. He is glorious to watch and his top-end speed has made people look a bit silly. Wide-eyed and hungry for knowledge, his trajectory is set high and with a Hugh Grant-esque stammer when he speaks, it is tough not to fall in love with this very English product. Ruaridh McConnochie has been a bright light in an overall bleak Bath season. He deserves a mention.

13 Joe Marchant – England have a wealth of talent at 13 with Manu Tuilagi, Henry Slade, Alex Lozowski, Jonathan Joseph, and even Elliot Daly. Tough on Marchant to be doing what he does in that company, but he’s operated sublimely this season. Not a surprise Quins waned when he was out injured towards the end of the campaign.

12 Ollie Devoto – Devoto has been regularly strong for Chiefs this season and along with Ryan Mills has shown there may be ball-playing options if needed. Mark Atkinson has caught the eye and acted as a fine foil for magicians inside him. I couldn’t name him though, could I? It would go to his head. Devoto gets it, just.

11 Marcus Watson – this was a coin toss between Watson and Tom Collins, who has sparkled for Saints when given the chance. Taqele Naiyaravoro will wonder what he has to do to impress me, but Watson has taken scant chances very well in a misfiring Wasps’ side.

10 George Ford – Funny season this for George; jettisoned from England’s starting XV and Leicester capitulating to almost fatal extents, but Ford has always played well when I’ve watched. You could make a case for Duncan Weir as well, who’s been the difference for Warriors, and Callum Sheedy has been an unexpected star for Bris, but Ford still ticks all the boxes, for me. (Yes, yes, Cipriani, he’s incredible, but I just didn’t want to put him in.)

9 Cobus Reinach – a season for South African nines with Faf de Klerk and Francois Hougaard also doing well. Ben Spencer at Sarries should have done enough to ask Eddie some questions, and Danny Care is normally excellent for Quins. Reinach has been majestic for Saints though, and nothing encapsulates his offering more than a try-saving tackle, intercept and 90-yard sprint. Irrepressible in Black Green & Gold, he has to be in. 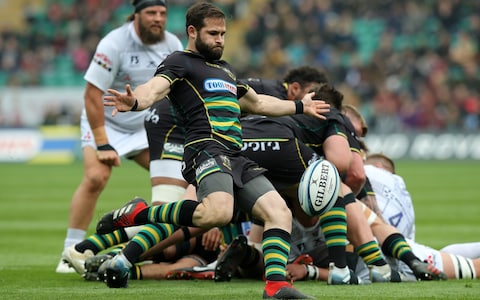 Reinach has been the conduit for Saints

1 Ross Harrison – just looking up the list at my inadvertent leaning towards English Qualified Players on this list and here’s another who has done brilliantly this season. Sale fans adore him, even though Eddie keeps missing the memos. Has worked tirelessly all season for Sale and will continue to be a reason why they do well next year, despite all the other arrivals.

2 Harry Thacker – Thacker’s approach echoes that of Bristol. Almost omnipresent on the field, never too far away from trying it on and always enjoying his work. A beating heart in a team that has pulsed attractively all season. I can’t think of a Premiership hooker more prominent on his team sheet this season. Maybe you can.

3 Harry Williams – Williams gets this from Kyle Sinckler because of Sinckler’s inability to curb his indiscretions. John Afoa is notable, as is Fraser Balmain who has come into his own this year. Williams completes what is a pretty hirsute front row.

4 Franco Mostert – A nod in the direction of the whole Gloucester Pack, who have been the difference this season, whatever Danny Cipriani’s fans might tell you. Mostert’s work with Ed Slater has been unrelenting this campaign and a major reason why they find themselves clear in third. Will be fascinating to see how they go next year.

5 Will Skelton – Much has been made about his physical transformation this year but I also think that Saracens have given the Australian a real mental edge. The Barnet Boys’ quality in the engine room means they can often bring Skelton off the bench in big games and his presence against the likes of Munster late on was the telling blow.

6 Dan Thomas – Chris Robshaw has been back to his best and Mark Wilson has done well this year but my eye has been caught by the exiled Welshman scoring improbable tries in BS3. Jono Ross has been industrious, as has teammate Ben Curry. Thomas has it though, don’t @ me.

7 Lewis Ludlam – I really like Sam Lewis at Worcester, Tom Curry has been indefatigable and Guy Thompson has played like a man possessed but Ludlam has been different gravy for Saints. Still very young, the next few years’ development for Ludlam will be very interesting. Given a chance by Boyd and he’s taken it with both hands. Hats off.

8 Alex Dombrandt – I should really give this to Matt Kvesic, but I think Kev himself will appreciate Alex Dombrandt’s achievements this year. Definitely not Welsh, despite playing for Wales U20, Dombrandt could be next in line to Billy’s throne. Sam Simmonds might have something to say, remember him?

Disagree? Come on then, let’s hear it…

1 Response to Team of the Season – Gallagher Premiership 2018/19