It’s a mad world my masters. Now, more than ever. And to prove it so, European Rugby was comprehensive in its lunacy. The sublime and the ridiculous; the mundane and the daft. If you had any reason to doubt how crazy this sport is, how capricious, then spend a couple of days following the European action.

Eddie Jones did. Popping up on big screens and smiling like a mischievous uncle. Crowds at the Ricoh booed him. Very much in keeping with the pantomime style the old dame enjoys in his press conferences. Creating stories out of nothing and then complaining that the media wants to talk too long; ignoring the form of some and picking others who have not played at all. ‘Don Armand’s behind you’, we all shout. Eddie loves mischief.

His mate Bruce Craig loves it too. Confusing power with piety. Just because you get to make decisions, doesn’t mean they are the right ones. You can see how similar Jones and Craig are, and why they despise each other; what we hate most in others is what we fear in ourselves. Bruce wants to play Toulouse again; watching them hold out Leinster on Sunday night shows how daft a decision that is.

Talking of daft: Cardiff and Glasgow turned up to play each other in very similar kits. As if the game wasn’t hard enough. With a low sun and the same azure blue running across the chests of all 30 men, no one was sure who to tackle or where to pass. Blazers were to blame; aren’t they always? Glasgow’s normal strip is black; Cardiff’s alternate strip is white. Either of those would have done. How like rugby not to be able to make a decision.

Decisions are being made though. Not that people like them. Danny Cipriani’s tackle saw shoulder connect with head, red was dealt and Gloucester’s tricky job at Thomond Park got trickier. Billy Vunipola’s other arm (the one that isn’t broken) tweeted, apologising to those who’d bought tickets. He thinks the game’s gone soft. Yes, that’s right. A man who faces another lengthy spell out because of how tough the game is, wants us to ignore how potentially hard it is on each other’s heads. HIA anyone?

Vunipola’s injury brings us round to England’s back row. Both he and Robshaw (knee) are out, along with Sam Simmonds (knee) and Nathan Hughes (punchy tweet). To some, England’s backrow cupboard may look a little bare. Cue Maro Itoje’s scintillating performance at six for Saracens. Gazumping and galloping, all game long. Glory be. Maybe play him at 8? What? No, you shut up. 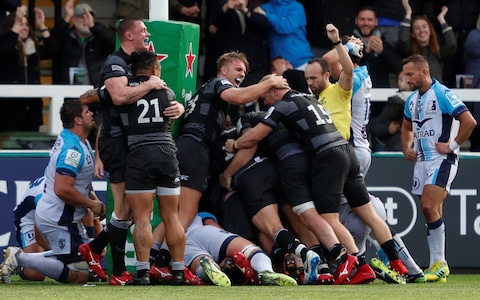 Speaking of shutting up, as he crossed over for a try, Racing 92’s Simon Zebo was asked to shush by Nigel Owens, a man famous for his talking. The Parisian side are quietly going about their business in Pool 4 and Owens obviously wanted to keep it that way. He approached the Irish winger metaphorically wagging his finger. Zebo apologised for literally wagging his finger and everyone watching nodded their heads, approvingly.

Disapprovingly, crazily, Exeter are struggling in Europe. Unbeaten and top of the Premiership, they remain winless in the Heineken Cup despite playing a majority of the game against 14 men in Castres. Steve Mafi showing all the dazzling footwork of a man half his size to down the Chiefs and show that league form counts for nothing. Newcastle will agree, bottom of the Prem, they remain unbeaten in Europe. Both Toulon and Montpellier impressively shut out, the latter at home via 39 phases and 89 minutes. Tyneside out of their tiny mind. The final is in Newcastle this year. It’d be madness to think the Falcons could make it.

It’s a mad world my masters.