I watched Elise Christie attempt and fail in her quest to win the 500m Speed Skating title at the Winter Olympics in South Korea on Tuesday. Like many I tuned in to see her lay a few demons to rest. I remember what happened four years ago. It was painful. 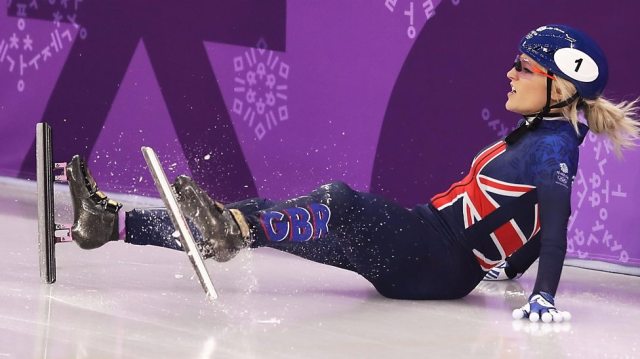 Speed Skating strikes me as a sport where, to win, everything has to go right. One mistake can cost you dearly. The difference between success and failure appears finer than the razor sharp blades on which they compete. Five hundred metres is the shortest race available and barely enough time to recover should you make a wrong move. Competitors spin out on a regular basis, the centrifugal force chucking them against the padded sides like tormented souls in the craziest of asylums; you’d have to be mad to compete.

And yet they do. Christie is one of the best: hatfuls of medals in her locker; world records filed under her name. But yesterday the tiniest mistake in the semi-final meant she started in a tricky fourth (and wide) position in the final. She forced herself gallantly on the field but eventually came undone, sliding into the hoardings with one lap to go. After the final machinations had been worked out and places awarded (the Korean favourite ended up being disqualified and had her silver medal snatched away), the BBC caught up with the stricken Christie. Obviously distraught at having, once again, had this particular Olympic dream shattered (she still has the 1000m and 1500m events to take part in), she blubbed her way through the interview. She sobbed at the injustice of it all, bemoaned her opponent’s move that had seen her fall to the ice, and whimpered at the suggestion that she would get over it.

If I’m honest, I didn’t like it. I understand the pain and disappointment. I know, I’ve never lost out on an Olympic gold but I’ve lost other stuff, things I found equally important and it hurt. But this reaction was wrong. In a sport that seems to spit people out with alarming regularity, here was Christie reacting as though it had never happened before. It was odd. The BBC tried to dress it up as brave. But it was nothing of the sort. Courage would have seen Christie shed no tears.

Which brings me on to the second sporting spilt milk of the past few days: the TMO’s erroneous decision at Twickenham in the Six Nations game between England and Wales. A situation which has got worse via a subsequent admission from World Rugby to the Welsh Coach Rob Howley, that the official with the TV screen in front of him got it wrong. As we all felt at the time, Gareth Anscombe did get the ball down. World Rugby are now saying that a try should have been given. But, my point is this: it wasn’t.

This is sport. Played by humans, watched by humans, administered by humans. Mistakes are everything in sport, they are a necessity. If we have no mistakes then, we will have no results. For every goal, we need a miss; for every ace, a double fault; for every putt sunk, we need one to lip out. We need officials to make errors. I know we have introduced Television Match Officials, (goodness me doesn’t speed skating use them?!) but they too, are human. And we need human. We need mistakes.

Elise Christie made a mistake. She is human. I wanted her to realise that in interview. And I wanted her to tell us that, although she was gutted, ultimately, she’d be back. That’s what was missing. Maybe I’m being too tough on someone in the heat of the moment, with injustice still coursing through her veins, but I needed her to be stronger. Because we all make mistakes. Sometimes really big ones. Mistakes that hurt and break hearts and make you wish with all your might that you’d never done it. But that is life. It’s certainly sport. In fact, sport is really about losing, not winning. So I need my sportsmen and women, people like Elise Christie and Rob Howley to say, ‘There was a mistake, I’m very disappointed, but it is what it is. We will go again, fighting just as hard tomorrow.’

Because the past is done, it’s the future we can change. And if they can’t say that, those taking part in sport, where does that leave the rest of us, in the real world, where things really matter?