King Lear is my favourite Shakespeare play. It is epic. In truth, it is two separate plays entwined together. Love, rejection, honesty, guilt, senility, cruelty and hope: all mashed up with some of the best lines the Bard ever bashed out. Lear is humanity laid bare. In it the old become young; the foolish, wise; the powerful, inept. In many ways, it is the greatest of plays. It takes what we think we know, and makes us ask vital questions.

And this is where I am with the Rugby World Cup. Not that rugby is more than sport. It isn’t life and death, I know that. But it does make you wonder how it all works. A tournament like we have just experienced plays on the full gamut of life’s emotions and some of the famous lines from Shakespeare’s King Lear are more than apt as we review the competition. Rugby World Cup 2015 has taken what we think we know, and made us ask vital questions. 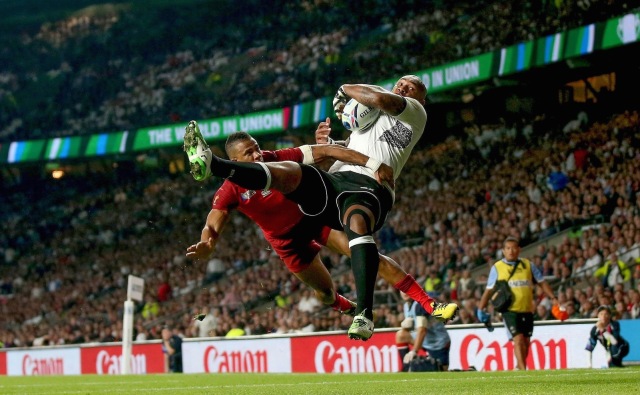 “Nothing will come of nothing, speak again.” Act I, Sc 1

This Rugby World Cup, from an England point of view, will be remembered for an adherence to one particular strategy. There seemed to be a blind faith, a steadfastness, an assertion that this was how it was all going to work. From a long way out, England were going to base their back line around Brad Barritt or in his stead, Sam Burgess. Just like Lear, as he carved up his kingdom, Lancaster had one plan. There was little guile, nothing too clever or artful. And his team news leaked, like courtly gossip, with teams finding it easy to undo all his hard work.

England were set on playing a fulcrum inside centre, something other parts could work around. A big man who would run at defences like a sledgehammer and in turn be able to withstand sledgehammer blows. It was transparent and ultimately, too easily seen through. Moments in games call for a plan B or even C, something different to unlock the door. When other teams asked England what else they’d got, ‘nothing’ came the reply. Lancaster, like Lear, will end up in the wilderness.

“I am a man more sinned against than sinning.” Act III, Sc 2

The seeming imbalance between so called Tier 1 and Tier 2 countries at this Rugby World Cup has caused outcry. First it was the unfairness of rest days: Japan, so gallant against the mighty ‘Boks, were only granted a four day rest before their match with Scotland and everyone was up in arms. But looked at as a whole four week period, most sides endured quick turnarounds at some point. Australia played on the Wednesday and then the Sunday in their first two matches. South Africa themselves went Saturday/Wednesday with two games they had to win (Scotland and USA). Given the time constraints of fitting all these matches into the group stages, would it be realistic to not have some squash? Nearly all teams had to make it work at some stage. The only team to not endure this sort of hardship were the hosts, and a fat lot of good it did them.

And then came the claim of unfair treatment as regards citing and disciplinary processes. Apparently Tier 2 countries were being penalised more heavily because, well, they weren’t Tier 1. Videos were put forward of similar offences; some punished (Tier 2), some ignored (Tier 1). Lesser nations heralded a conspiracy. But their claim was littered with inaccuracies (incorrect clips) and a lack of full information. You see, sentences are handed out not just on the isolated offence; they considered mitigating factors, past player records, pleadings: things we fans couldn’t see or hear; to compare just the video footage wasn’t fair. Like in other courts, if two people commit similar offences, they can receive different sentences.

Whilst, I am fully behind a drive to give Tier 2 sides more exposure, more meaningful rugby and would welcome changes in schedules and opportunities to support these teams, I think this claim of discrimination is a little too far. I feel these ‘minnows’ have shown the world what they can do, so much so that that patronising title does not now apply. I feel they have been ignored previously and, despite the lack of Tier 1 respect, have shown the appetite and desire they have for the game. We should respond by working them into more regular competition. I want to feel sympathy for Tier 2 nations, they have been hard done by, like Lear when he utters this phrase half way through the play, but for them to ride this sympathy, with such a dubious claim of purposeful prejudice, weakens that feeling. There maybe issues with way disciplinary hearings are communicated, but they aren’t discriminatory. Suggesting so makes muddy the other genuine claims they have. 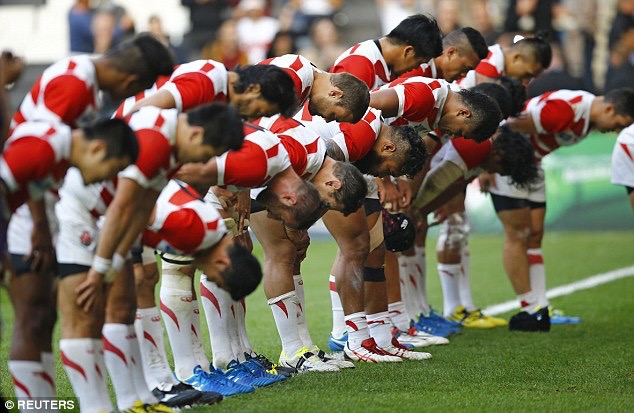 The involvement of the Television Match Official in the RWC has enjoyed mixed fortunes. Whilst proving crucial under the right whistle, in some cases, it debilitated referees. Jaco Peyper couldn’t make any decision on his own when England played Fiji, referring nearly every decision ‘upstairs’; slowing the game and making what should have been an incredible occasion tepid. And he wasn’t alone. On more than one occasion, referees stumbled when they saw.

The TMO was introduced to help with big decisions, and in many ways rugby became the envy of other sports, being able, as it was, to embrace technology. However, it is now in danger of taking away the feel that the men in the middle should have. Top referees have always operated within the flow of the game, not applying the black and white of the laws, but using ‘grey’, judicious discretion. Nigel Owens is so effective and appreciated not because of his knowledge and understanding of the laws, but because of his knowledge and understanding of the sport. We need to make sure we don’t step too far.

And yet, like any good Shakespearean baddie, having had his efforts maligned, when he was needed most, the TMO was conspicuously absent. Referee Craig Joubert wasn’t able to call upon his multi-angled friend in the egregious quarter final. The penalty that wasn’t a penalty (the one that dumped Scotland out of the World Cup) would have been reviewed to be just a knock on and scrum down. There must be a better way to use the eyes that we’ve been given.

Lear is ultimately undone by old age; a foe we all rally against but, despite our best efforts, can never overcome. Rugby’s death knell is retirement. Some fall early, too early, with so much yet undone. Others push on through, defying time and bodily constraints, but ultimately, even for the sport’s greatest exponents, a final curtain call is inevitable.

Richie McCaw may polarise opinion; yet his standing in the game is unequivocal. His defiance of time, physics and, some might say, the laws of the game have etched his name indelibly into rugby folklore. For many fans, he is everything: tireless, strong, irrepressible; a man who has redefined his position and the sport; a player to whom the game of rugby owes a lot. And yet the time has come. Throughout the tournament, the chill (ague) Lear talks of, was creeping dangerously close to McCaw. You can do what he has done in the game, captain of the world’s greatest team, nearly 150 games at the highest level, but there remains one breakdown at which he can’t compete. It is sobering to think him gone from the international stage. Even those who bemoaned his presence will mourn the loss. He will, however, enter the pantheon of rugby greatness with one more title firmly in his grasp. The final was his finest hour. This one was always his. 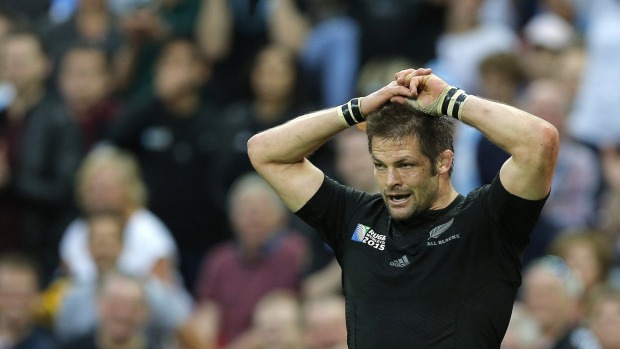 This is perhaps the most appropriate of Shakespeare’s lines. When you think of all we’ve been through these last two months; yet we end up where we began. New Zealand are what we knew they were, the best side in the world; what they were last time we asked the question. Perhaps we should never have doubted them. Maybe that was all part of the fun.

And this is not the only wheel on the turn. England return to the rudderless ship of late 2011. The mess that was left by Martin Johnson has been recreated, just with a different cast list and charge sheet. The ‘Tindall Stag Do’ has been replaced by the ‘Burgess Blind Spot’; there has been another breakdown in trust. Senior players reportedly now suggest there should have been more fun not less; headphones, which were previously banned by Lancaster, became a bone of contention; middle management went horse whispering; there were doubts over who picked the team; and by not selecting the best players because of club rugby, reverberating chasms of what ifs and if onlys. Who should take over from Lancaster? Many people’s choice is to return to Sir Clive Woodward; another wheel seemingly creaks back into place.

And Sam Burgess: it looks like he will return from whence he came, completing a neat circular rugby odyssey. What a curious and pointless process he has been through. He has done little wrong other than give of his best. His best, of course, under the circumstances, wasn’t quite good enough, but that can hardly have been a surprise. The sport has missed some opportunities in its time but to allow such a specimen to slip through its fingers is a crying shame. A great chance spurned; Union’s loss is League’s gain (or maybe that should be regain).

And so having travelled 360 degrees on so many wheels, what now? I think we need learn from what has happened as we revolved. We need to make sure we don’t continue the cycle. We need to look at how the New Zealand have remained World Champions; how Argentina have improved; how we can make the most of Georgia, Namibia and Japan’s advances in the game; how to best use the TMO; we need to assess the mistakes made with Burgess; we need to be honest, painfully so; ignorance of what has come to pass will be the death of us.

“We that are young, shall never see so much, nor live so long.” Act V sc 3

As the All Blacks lapped the pitch, celebrating their final win, a young fan ran towards a group of players and was flattened by an over-zealous steward. Sonny Bill Williams interjected, and accompanied the boy back to his seat and gave him his winners’ medal as a gift. “I thought I’d make it a night to remember for him,” said Williams, “Rather than my medal being hanging up at home or something like that.”

The significance of this gesture is manifold. Not only does the man, so famous for his incredible offloads, continue to produce long after the whistle has gone, but Sonny Bill reminds us what life is all about. It is not about the here or now, not the medals or the acclaim, but the future. We shouldn’t dwell on what has happened. Whether good or bad, it cannot be changed. What we can influence is the future. How people think and feel about us and our sport can still be affected. Williams’ gift was not the medal, but the idea that gongs and trophies only represent the past. Yes, of course, celebrate, but don’t pause too long. Aspiration should be our focus. This Rugby World Cup has given everyone something to aim at. Sonny Bill wasn’t just giving a medal to a boy, perhaps unknowingly, he was conveying a message. Through his seeming generosity and selflessness, he was giving a gift to the next generation. This was my ambition, he was saying, it can be anyone’s.

Thank you Sonny Bill. Thank you Rugby World Cup. Here’s to the future, let us live long and see much. 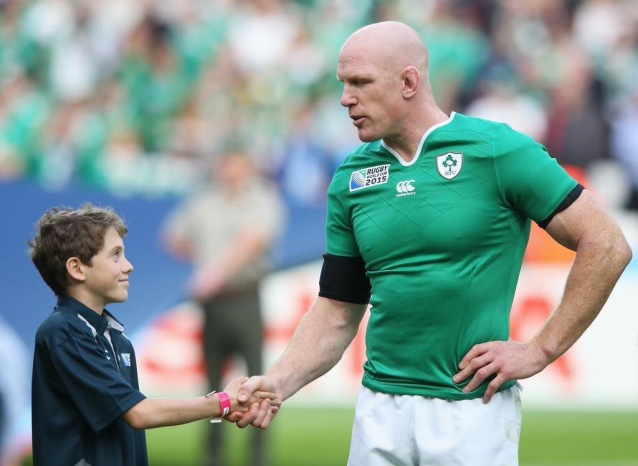