I am trying to explain the situation to my wife. She is patiently waiting to serve up a delayed evening meal*, as it is obvious I am not going to be forthcoming. I’m attempting to describe one of the many moments that led us here: the deflection off the outstretched bat of Ben Stokes, which means we would now have a super over. It’s complicated and involves phrases like ‘Martin Guptill’ and ‘four overthrows’. “I don’t really understand cricket,” she proffers, sheepishly, keen not to dampen my tingling enthusiasm. And that’s just it. Neither do I. Nor does anyone who watched the afternoon unfold.

England are World Champions. That’s where we ended up. Travelling a gut-wrenching route through every emotion. Thousands of incredible sports journalists, the world over, are currently trying to find the words to sum it all up. And yet, curiously, I’m not sure anyone will ever be able to. When sport serves up its finest work, there are no words to do it justice. Pure, sporting grandeur is action and reaction; words are secondary. 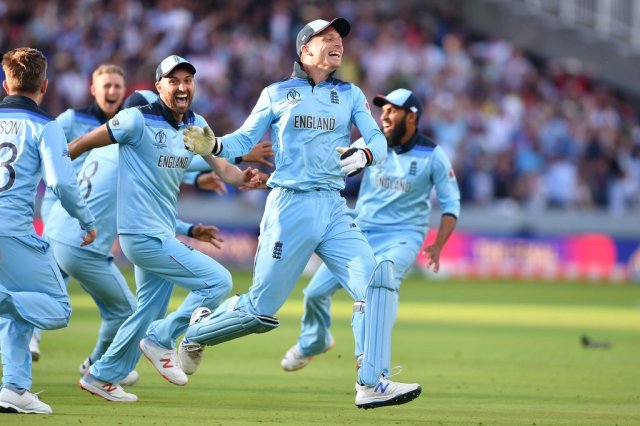 I’ll stumble forth though. Various moments on which to hang some vowels and consonants; Kane Williamson wafting at one on its way through to the ‘keeper and umpire Kumar Dharmasena shaking his head. Dharmasena, the man who’d got it so dreadfully wrong with Jason Roy in the semi-final and who’d been seen embracing the England opener before the day’s play, wasn’t going to make the same mistake twice. A rum referral from Captain Morgan though, the armed ‘T’ to subpoena the TV match official was made high and defiantly. Front foot, fine; first replay, can only be bat; ultra edge, flat line, flat line, flat line, SPIKE!! Liam Plunkett gets him. Plunkett, a man of yesterday. A name that had supposedly been consigned to history. But he’s here, today, snicking and trapping and fooling New Zealand batsmen off a length. He’d get Henry Nicholls too. And Jimmy Neesham. “How often does he do this?!” wailed Ian Bishop in commentary at the third. By my reckoning, seemingly forever.

Last ball of the New Zealand innings. Mitchell Santner, batting in glasses (can you do that in a Cricket World Cup? I mean, sure, it’s legal, but aren’t your fellow pros going to say to you, “We like you, mate, but lose the glasses and wear contacts when you’re batting, yeah?”). Santner is facing, Archer with it. The New Zealander ducks under the bounced delivery. Avoids it! Instead of swinging merry fudge at it in an attempt to eke out at least one more run to add to the total, he ducks under it; seeks a tentative run and then recovers his ground. Eh? Surely, you peg it? I mean, I don’t want to be the one that points this out but, 241 runs might not be enough. Go for one more. You never know, you could need it…

Another; England are batting and their captain is desperately trying to get things going; Eoin Morgan flings one off his bat towards the offside boundary and shouts longingly after it. ‘No!’ is audible over the onfield mics: as if talking to himself and the onrushing fielder, simultaneously. No, don’t hit it there! No, don’t catch it! But Lachie Ferguson doesn’t care. Lunging forward like a man entrusted to catch a falling World Cup, he rises with a moustachioed smile and a finger in the air. Sublime. You know it’s out when you’re that good.

Talking of good, another, from the final throes: Stokes smites one incredibly towards the boundary. 22 needed from 9 deliveries. Stokes is dragging England towards an inexplicable target; one that for a growing portion of the afternoon had felt so distant. Heaving now without Jos Buttler, with whom he had wrenched the dastardly deed around. Single-handedly, lugging the trophy back England’s way, hauling an unimaginable victory home, pulling the ball towards a retreating Boult. Trent Boult, whom, a moment earlier, had caught Liam Plunkett in a similar postcode. Trent Boult who’d caught Carlos Braithwaite on the boundary, so heartbreakingly, to foil the West Indies. Backwards he crept. This was the end. The ball seemed, at the last moment, to lurch toward the boundary and Boult adjusted his body weight by catching it high above his face but also took one step further back towards the rope; his heel sunk into the triangular padded edge; he tried to recover but fingers were in the air again: Guptill’s fingers. Out was now 6. New Zealand’s own players were quickest to identify what had happened, signalling to the umpires the truth. Not waiting and hoping, but admitting how their team had conceded vital runs. Supreme dignity and sportsmanship that would colour the rest of the afternoon.

There was so much in those final minutes. The bizarre and inadvertent four ricocheting off Stokes’ bat as he stretched out for a desperate second run. The umpire signalled six, but should it have been five? The run out of Adil Rashid which left Stokes at the right end. 3 from 2 became 2 from 1 and having run one, Mark Wood, England’s final batsmen, wasn’t going to make it back. Super Over. Really? I think it’s all been pretty super. Why can’t we all just go home and take turns hosting the trophy? Seems only fair. No one deserves to be going home without it. Sport this good has everyone winning, surely?

But no, one over each. England first. Buttler and Stokes again, the latter with a seemingly unquenchable thirst for battle, like he’d travelled a lot further than everyone else, and would not leave until he got what was owing. They smacked and sprinted. 15 amassed from 6 balls and the English pair had done well. (Amazingly, Boult had gone for 30 off his last two overs). Meaning New Zealand would have to score 16, because, ridiculously, England had hit more boundaries, and that is how this sort of affair would be sorted out. 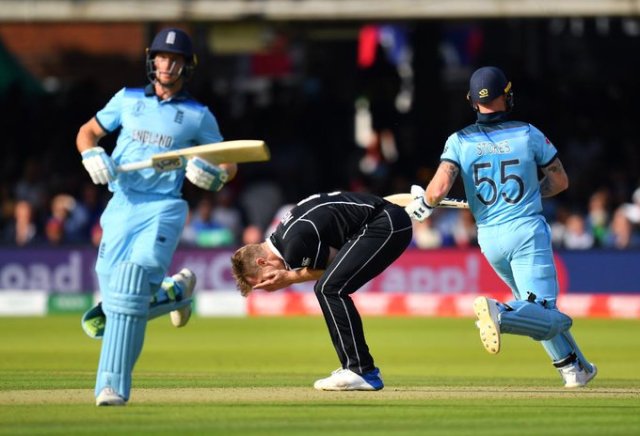 And whom to bowl? Jofra Archer. Twenty-four years young and last seen being skittled by a full toss. His most recent spell with the ball had been brilliantly stingy. Now he’d have to do it again. For the World Cup.

First ball; wide. Oh Lord’s. (New Zealand had sent in Neesham and Guptill. Why not Williamson? Never mind, what do I know?) Then an easy 2. Then a 6. Is someone keeping count? They need 7 from 4. Another couple. 5 from 3. And again. Jeez, Guptill is quick between the wickets (oh, that’s why they sent him in). 3 from 2. A single, which Archer lets them run rather than throwing down the stumps. 2 from 1. All of this for one ball? A gulp of gulps. An Archer with the final arrow. Guptill digs out a good yorker to mid-wicket and the onrushing Roy; he’d fluffed his lines moments earlier. No, this is clean, bouncing throw, Buttler in attendance…

Amid the beseeching melee that followed, Archer sinks to his knees. His teammates have followed the arcing, triumphant run of the stump-felling ‘keeper, but Archer is alone. Cricket is just that: the loneliest team sport there is. He was on his own as he ran in to deliver the final ball. On his own, as he released it and watched the climactic three and a half seconds unfold. So, only right that he be on his own to come to terms with the fact that he had just bowled the winning ‘super over’ that had claimed England’s first-ever Cricket World Cup. Alone, and yet, slumped to the ground, everyone in the country was with him.

Sport, eh? There’s nothing like it. Which is probably just as well.

*my food was cold, but hey, who the hell cares?